“I See Everything Through This Tragedy” 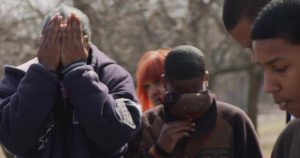 Author of There Are No Children Here, The Other Side of the River and Never a City So Real, Alex Kotlowitz produced The Interrupters with filmmaker Steve James, and his May 2008 New York Times Magazine article “Blocking the Transmission of Violence” profiled CeaseFire and its founder, Gary Slutkin. Kotlowitz was also the correspondent on the 2002 FRONTLINE film Let’s Get Married. The Interrupters airs Tues., Feb 14 at 9 pm (check local listings); watch a preview here.
· · ·How we ignore the long-term effects of violence on children, adults and our communities· · ·

At 10:45 on the night of March 13, 2009, Rodney Orange waited for his 14-year-old grandson, Gregory Robinson, to arrive home. Gregory had been at a high school basketball game, and as the car he rode in pulled up outside the house, Mr. Orange heard the sound of semi-automatic weapons. He remembers two distinct sounds of gunfire, suggesting there were two shooters. More than 50 shots were fired. He rushed to the car. Gregory had been sitting in the backseat and had thrown his body on top of his two younger cousins, one five years old, the other nine months. He saved their lives. Gregory was shot in the back.

“He wasn’t responding to me,” Mr. Orange recalled. “It was like he was saying, ‘I’m OK, but this is hurting.’ That’s the way he was. He wouldn’t scream and holler. But it hurt. It hurt so bad.” When Mr. Orange, a dignified, stolid man, related this story, it was clear he was talking both about himself and his grandson. Gregory died later that night.

Gregory Robinson’s burial is the opening scene of The Interrupters, the film I made with my longtime friend Steve James, and I tell the story of Gregory’s family because it speaks to the profound, unrelenting pain of losing someone to the streets. When we met up with Mr. Orange and his daughter, Gregory’s mom, it had been seven months since the murder, but their grief felt fresh and raw, as if it had happened the previous day. Gregory’s mother, Dawn, hadn’t touched her son’s bedroom. It was just as Gregory left it, his slippers at the foot of his bed. His basketball — he’d just made his high school freshman team — balanced precariously on the dresser. On a shelf in his closet, Dawn had left untouched Gregory’s collection of M&M dispensers.

Dawn so deeply grieved, she’d been unable to return to her job at the Chicago Transit Authority. “I have my days,” she told us. “I’m not always able to get through my day without having some sort of flashback. Her daughter, Autumn, began sobbing and screaming in the middle of her 7th grade Social Studies class. It took three weeks before she felt strong enough to return to school. When Mr. Orange, a former minor league baseball player, recounted the night Greg had been shot, it was as if he was reliving it. The muscles in his face tightened. His eyes become wide with fright — and anger. “That sight is still there. I see it every day and every night,” he told us. “And I do this.” He had begun to cry. “I feel so inadequate because there was nothing I could do to protect my grandchild.”